Thank you for your patience while we retrieve your images.

TFC acquired 2 P-40Cs from Russia in the 1990s, both of which have been restored to flying condition by Fighter Rebuilders and Aerofab at Chino, California. The pair are 2 of just 3 airworthy P-40Cs in the world. The first example, 41-13390, made it's first post-restoration flight in 1998 and was subsequently sold to Paul Allen's Flying Heritage Collection without ever returning to the UK. The restoration of 41-13357 was completed in 2011 and the fighter was shipped to the UK to make it's display debut at Flying Legends 2014.

Taken on charge by the US Army Air Corps in April 1941, 41-13357 first served at Patterson Field, Ohio before being shipped to Puerto Rico where it is presumed to have been employed on coastal patrol. After a total of 603 flight hours the Warhawk was returned to Curtiss in Buffalo, NY where it was refurbished prior to shipment to Russia under the lend-lease programme in December 1941. It's operational history in Russia is unknown.

Now presented as 39-159, a P-40C used as a station hack by Technical Training Command at Chanute Field, Kansas, 41-13357 is resplendant in its highly polished bare metal scheme. 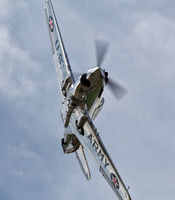